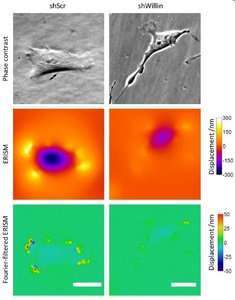 In a cooperation with the groups of Frank Gunn-Moore (School of Biology, University of St Andrews, UK) and Kishan Dholakia (School of Physics, University of St Andrews, UK) the Gather Lab discovered that expression of the protein Willin/FRMD6 influences both the cell mechanical phenotype and neuronal differentiation of SH-SY5Y cells – a commonly used neuronal model cell system.
By investigating cells with increased and decreased Willin/FRMD6 expression levels with combined biochemical measurements and Elastic Resonator Interference Stress Micropscopy (ERISM), it was shown that Willin/FRMD6 not only affects proliferation and migration capacity of cells, but also leads to changes in cell morphology and to an enhanced neurite formation. These changes were accompanied by alterations of biophysical parameters such as cell force, the organization of actin stress fibers and the formation of focal adhesions. At the biochemical level, changes in Willin/FRMD6 expression inversely effected the activity of the extracellular signal–regulated kinases (ERK) pathway and downstream transcriptional factor, NeuroD1, which seems to prime SH-SY5Y cells for retinoic acid-induced neuronal differentiation.
The work, that has recently been published in the journal Frontiers in Cellular Neuroscience, opens the door for future studies on how Willin/FRMD6 may not only influence neuronal differentiation but may also play a role in neurodegeneration.